I am in Hong Kong. It’s early and my head is foggy, which is par for the course on Sevens weekend. It’s now Saturday morning and the Friday night, despite our best efforts to have "a quiet one”, got a little out of hand.

As is usual these days I reach for my phone, check the time and then open my emails. That’s when I get the news. I’m sat on the side of my bed and I’m sharing the room with my mate Dhugal.

He leaves it a few moments before responding. My voice tells him that this was no ordinary profanity.

“My dad has cancer.”

I do the only thing I can do. Pull on an egg costume and go on an 18-hour drinking session. 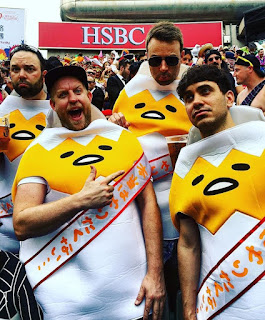 I am back at the hotel. It is sometime after 8pm and the five of us at the stadium all went in different directions upon leaving. Gudetama, my depressed egg costume, has gone straight in the bin and all I want to do is phone home.

All day I’ve not been able to get the opening line of my mum’s email out of my mind.

Being in the South Stand, which carries the slogan “where the world comes to play” has proved a handy distraction for much of the day, but not all of it. Despite God knows how many drinks I still feel sober as a judge.

I get my sister on the phone and manage to speak to both my Mum and then Dad. All I can remember is him saying that he is in a lot of pain. I feel incredibly far away, and in 36 hours I’ll get on a plane and fly five hours in the opposite direction. Back to Japan and a whole world of uncertainty.

I am in the office. The staff all know, but only three of them have expressed sympathy or concern; the rest did not say a word. I’m angry, but shrugging it off. I have made the simple decision to get on a flight home by the end of the week.

My boss is being very supportive, and everyone at the ICC Regional Office in Melbourne, who are due to arrive in Japan in just 10 days to run a tournament that I have been the lead on, are being equally so.

In the end, despite my initial upset at my team for their lack of decency, the staff all step up and take on my workload for the tournament; for which I am very grateful. 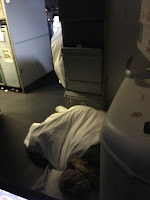 I step off the CX 509 from Tokyo to Hong Kong. Transiting through Hong Kong feels strange. Last time I stepped off a plane here, less than one week ago, I was full of excitement about the weekend ahead. This time it is fair to say I have an incredible sense of foreboding.

Next is the CX 253 to London Heathrow. On the flight I cannot concentrate enough to watch movies or read books. I managed to get the exit seat, but there is no window to stare out of. Instead I fix on the woman curled up in blankets on the floor near my feet. Clearly she didn’t like the people sat next to her. There is a song by the Chilli Peppers that I can’t get out of my head. It doesn’t help.

I am on the train to Cornwall. It is a four and a half hour journey, the same length as the flight from Tokyo to Hong Kong. At least this time there are windows to stare out of, and I watch as rain buckets down on the UK; a pathetic fallacy if ever I have experienced one.

The news during the past week has been slow and not exactly positive. We are told we should be thinking of months rather than years. Packing for the flight was the worst, I had no idea what to bring, how long I should stay or what I should be preparing for. Eventually I booked a five week stay, but made sure the flights were changeable. 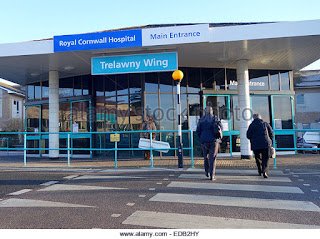 I stopped overnight with my sister in London and had a good update from her. She’s not sleeping well and there is not really much I can say to help with that. I am hoping that just by being around I am helping, but it seems a bit hollow. Her words after I booked my flights have stayed with me: “You coming home means it must be real”.

I disembark at Truro and get a taxi to the Royal Cornwall hospital at Treliske. It’s funny how cabbies are so much less chatty when you ask to be taken to the hospital. I’ve still got all my stuff with me, so it’s clear I’ve travelled a long way.

I meet my brother and my Mum then go to see the patient. He is in a ward with three others and the first thing I see as I walk in is “Bunny”, a skeleton of a man who looks so unwell that I immediately panic about what Dad might look like. Opposite Bunny on the right is a chap vomiting into a bowl. It is Easter Saturday, and I don’t think I like this place.

It’s Monday 24th April, nine days since I arrived and Mum and I are on our way to the hospital, for what we all hope is the last time in a while. Doing the journey everyday has taken a toll and we are both exhausted. It is helping keep Dad sane however. He has started on his memoirs and has asked for my help. We talked about this sporadically over the years and now he has suitable motivation things will move along.

Bunny is no longer with us and his bed was taken immediately by someone considerably noisier. It is safe to say Dad is happy to be getting out as well. He looks and sounds much more like himself. We were told the previous Thursday that it is prostate cancer, it took more than two weeks after he was admitted for that to be figured out, which seems a long time to me.

He is able to walk very short distances with the use of a zimmer frame and someone next to him for support. Pushing him around the hospital in a wheelchair during the last week was weird, but getting out of the ward was always a high priority, even if only for 20-30 minutes. 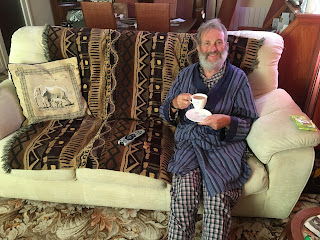 We are all incredibly relieved to be getting him home, but we are also acutely aware that this will bring with it a whole new set of challenges. A hospital bed was delivered the previous Friday and we have various other items to take back with us. Things are changing.

It doesn’t take long for the challenges to emerge. A first tumble, boredom, side effects of the drugs and a struggle to fill time when we would rather be making the most of it. On the plus side we did go out and by a 50-inch flat screen TV; so watching sport is now awesome. We are watching a lot of sport.

We are back in the car on the way to Treliske. It is nearly four weeks since we last drove this road and Dad is back for his first visit with the specialist. We are hoping for good news, but Dad is not optimistic. He is not sure he wants chemotherapy and keeps saying how important quality of life is.

My Mum has been a super trooper. She is tired and working constantly to do the best she can, but there are hurdles all over the place. I am due to leave tomorrow and am worried about how everyone will do after I go. I am not sure I have done much, but an extra pair of hands and someone to talk to over a glass of wine seems to be doing something.

We learn nothing from the consultant and are told to come back again in a month. Not much help for me but both my parents seem happy with it. A new drug is prescribed and hopefully this will help manage the pain, which seems to be considerable.

That night is not a pleasant one. There are lots of people around, my sister has come to visit with her family and my girlfriend has flown over from Japan. It’s hectic in the house and there are some frayed nerves leading to tears. I grab a beer and go down to the beach on my own for 45 minutes. I’m not sure why, but it seemed like a good idea at the time.

I am a little drunk and on my friends sofa in Tokyo. It is May 14th and Dad has been for a second visit with the consultant. Everything has changed. Since the last visit his mobility has improved no end; the zimmer frame is a thing of the past as, for now, is the hospital bed. News comes through that the revised worst case scenario is two-three years but with chemo that could increase to four or even five.

“Stop the Rollercoaster” one of my sisters messages. We are all relieved, and Dad is now happy to have a go at chemo. He is aware of the potential side effects but feels it is worth it now. It will be an 18-week course, so with any luck will be done by late October.

Nick, who was in Hong Kong with me the weekend I heard all this for the first time, but was not aware of it until much later, suggests we have another drink to toast the news. I am more than willing.

It’s today, Sunday 2nd July. I am reading back over the messages from Dad yesterday. We were in regular contact during the rugby; the British & Irish Lions have just beaten the All Blacks for the first time in 24 years.

He started chemotherapy on Friday and his messages read:

“You will be glad to know I have slept well. I have no nausea as yet and I will not complain if I need more sleep. Keep smiling, I am.” 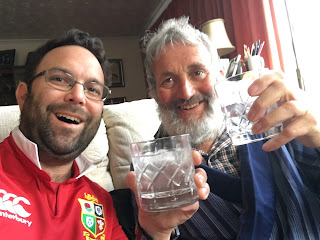 Later in his messages he is talking of a beer and pasty outside and I wish I was back there again. The difference now is that I know I’ll get more beers and pasties with him – even if only for a few more years. It is a hell of a lot better than a few more months.

There are still tricky times ahead. I feel like I’ve been turned upside-down, spun round and round and flipped inside-out. For the first time in a while however, I am in a genuinely good mood and think that things might just be OK for a little while yet.